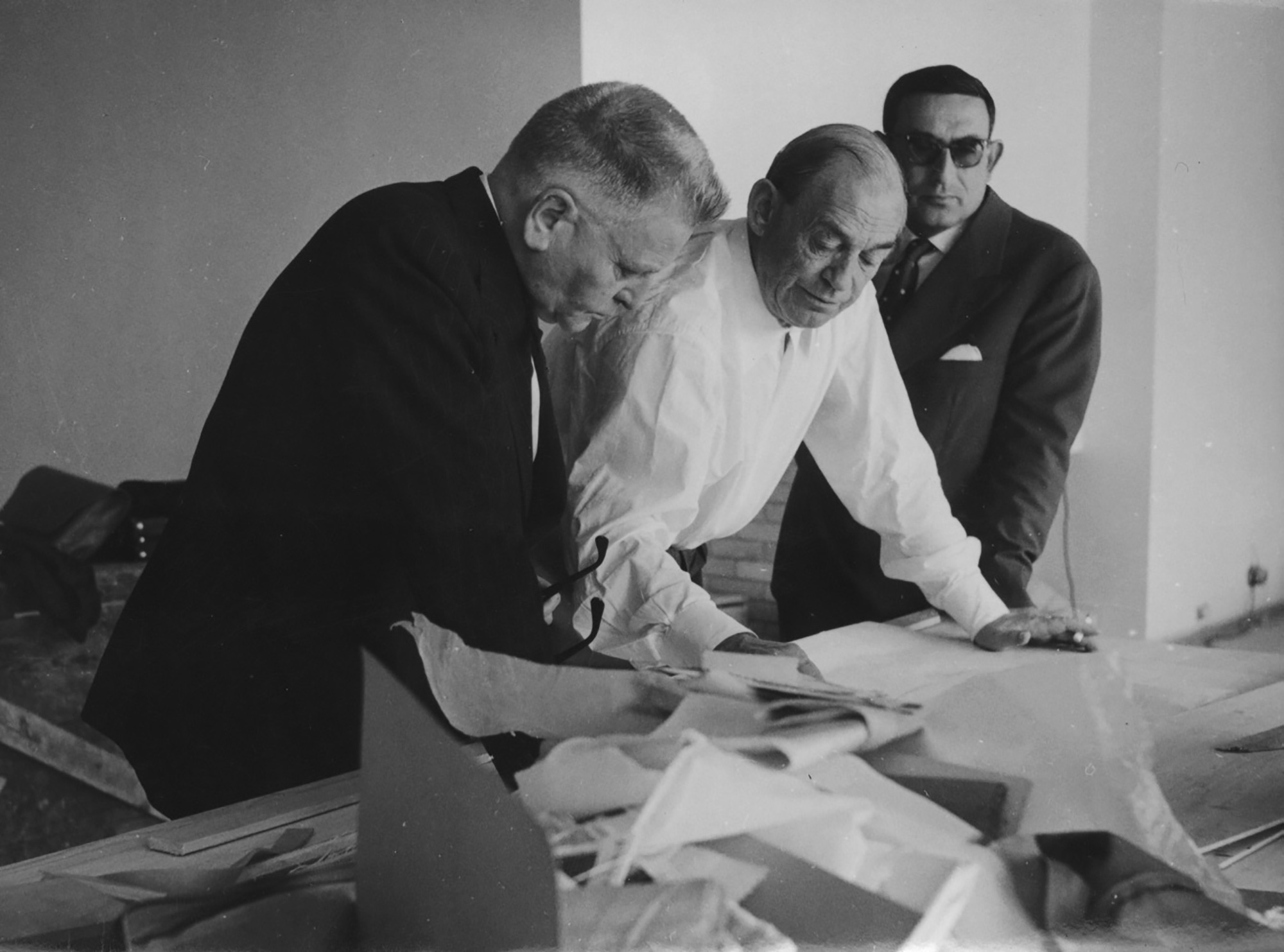 The Finnish architect and designer Alvar Aalto (1898-1976) is acknowledged as one of the masters of twentieth century architecture. In the middle of the 1950s, at the moment of his encounter with Louis Carré, he had already designed several major buildings in Finland, such as the Paimio Sanatorium, the Viipuri Library, the Villa Mairea, the National Pensions Institute in Helsinki, the Säynätsalo Town Hall and the House of Culture in Helsinki. His international fame was growing, although he had not yet built much abroad, except for the MIT Dormitory in Cambridge, USA (1947-48) and an apartment building close to Berlin (1955-57). In France he had attracted attention to his Finnish pavilion at the International Exhibition in 1937, where he had become friends with members of the Parisian art circles, such as Christian Zervos who published several articles on him in his magazine Cahiers d’art. As the pavilion was demolished no building by Aalto was left in France.

Of Brittany origin, Louis Carré (1897-1977) was a lawyer at the Rennes Court before taking over the family business of antiquities. In 1928 he published Le Grand Carré, devoted to hallmarks in old French plate, which is still an authority in that field. At the beginning of the 1930s he discovered primitive art and then went into modern art. In 1934 he met Le Corbusier and moved to live in his Paris building in 24 rue Nungesser et Coli. He exhibited works of Le Corbusier, among others, in the modern art gallery he opened with Roland Balaÿ at 10 avenue de Messine in Paris in 1938. He was mobilized the year after and founded the Galerie Louis Carré at the same address in 1940. The gallery stayed open during the war, presenting Dufy, Matisse, Rouault, Vuillard and Jacques Villon, among others. After the war he defended Bazaine, Estève and Léger, for example, and opened a gallery in New York. 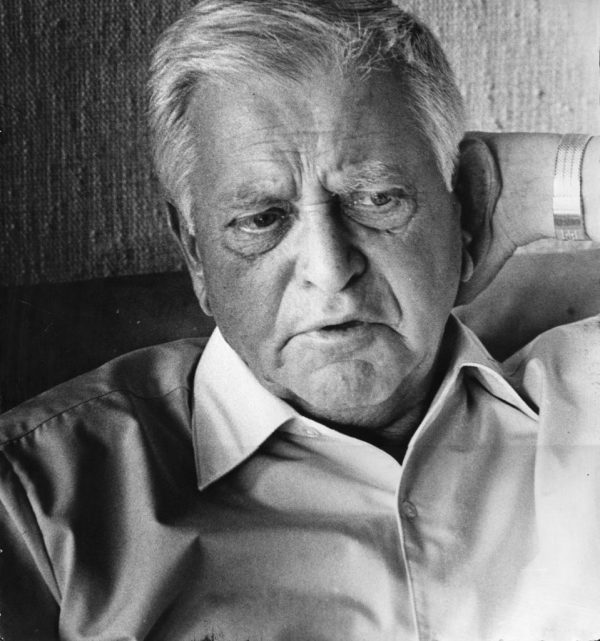 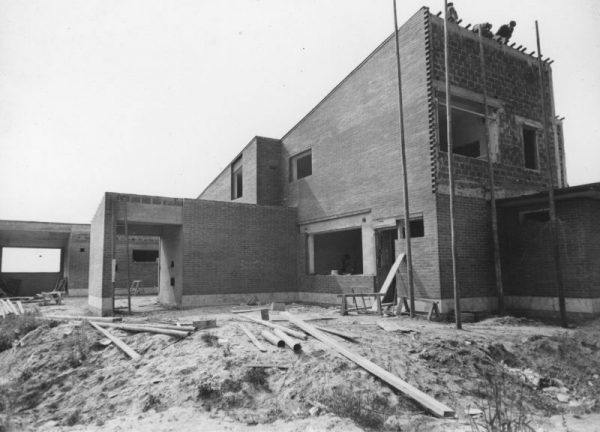 It was through Jean Monnet, one of the European Union’s founders, that Louis Carré became familiar with Bazoches, when he borrowed his thatched house while he was living in Luxembourg 1953-55. When Monnet returned he advised his friend to buy several farm fields opposite his estate. Carré decided to build a residence there and started to look for an architect. According to an interview given in 1967, he was afraid of Le Corbusier’s “concrete” side and chose rather to write to Alvar Aalto of whom he had heard from artists and gallery-owner friends. Their first correspondence in 1955 lead to a meeting the year after at the Venice Biennale where Aalto opened his Finnish pavilion. The architect, in full maturity of his art, and the successful gallerist, respected defender of modern art, immediately got well along together. They were of the same generation and, as Carré himself put it, they had “both a rather universal idea of art” (interview with Irmelin Lebeer, 24.7.1967, p. 49). It was the beginning of a lifelong friendship.

After this Venetian meeting Louis Carré went to Finland during the summer 1956, where he visited the Villa Mairea and other buildings by Aalto. Then Alvar and Elissa Aalto came to France to see the site. It has a gentle slope and is located at the border of the Rambouillet forest. The building spot was decide, as well as the form of the roof, for Carré did not want a flat roof and Aalto agreed that a sloped roof would blend better with the landscape. Otherwise the architect got almost a totally free hand.

The demand for planning permission was submitted in December 1956, the final plans were ready the year after and the construction began in autumn 1957. Elissa Aalto (1922-1994), the architect’s second wife, participated actively in the planning phase and was at the head of the project. She spoke French and stayed often in France during the construction process. Louis and his third wife Olga Carré moved into the house in June 1959.

Alvar Aalto also designed the garden of 3 ha, the entrance gate, a garage and in 1961-63 a heated swimming pool and a pool house. Over the years the Aaltos added several features such as outdoor lamps, flagpoles, awnings and furniture.

DESCRIPTION
Maison Louis Carré is a private house of ca. 450 m2, situated on the garden level. The ground floor is articulated on two levels around the entrance hall and can be divided into three main zones: the “public” area (hall, cloakroom, living-room, library, dining room), the “private” area (three bedrooms with one bathroom each and a sauna), and the “service” area (kitchen, pantry, larder, staff’s dining room). On the first floor there are staff bedrooms and a linen room. The basement includes a boiler, a laundry, a wood stock and a wine cellar.

On the outside the villa is covered with local stone from Chartres, lime-washed bricks, copper and wood. The roof is made of blue slate from Normandy. The interior is dominated by a large entrance hall, the free-form ceiling of which is made from red pine from Finland, laid by Finnish craftsmen. Other materials are: red stoneware tiles, oak, ash, teak and marble.

What makes Maison Louis Carré special amongst Alvar Aalto’s private houses is that the whole interior design – including fittings, furniture, lamps and textiles – was designed by Aalto or by his collaborators. The major part of these elements still remains in the house. The furniture – both standard and custom designed pieces – is made of a wide range of wood species, such as birch, ash, teak, pine, beech, sycamore and mahogany. The chairs are covered with black or natural leather; the door handles are from bronze and leather. Alvar Aalto paid great attention to both natural and artificial lighting in the house. Several types of specially designed lamps sustain skylights and wide windows. Elissa Aalto designed many of the textiles, such as the big red and white wool carpet in the living room.

The house is situated on the top of a hill, originally overlooking an open rural Ile-de-France landscape. Nowadays tall trees hide the views from the house and the small vineyard that used to grow beside the library terrace has disappeared. On the south side, the bedrooms enjoy private terraces that lead to terraced steps descending towards the swimming pool. A small amphitheatre connects with an oak grove, where the Carrés used to hold their annual garden-parties.

A HOME OF ART
Maison Louis Carré was designed as a permanent residence and to put on display its owner’s fabulous collection of modern art. Paintings by Léger, Bonnard, Picasso, Dufy, Villon, Lanskoy and Klee, sculpture by Henri Laurens, Calder and Alberto Giacometti as well as African art ornated the house. Artists, writers, clients and friends were invited to the villa and the house’s guest books show the quality of the social and cultural life lead in this brilliant home.

After Louis Carré’s death in 1977, the house went to his widow Olga, who lived there until she passed away in 2002. The artworks were put on sale at an auction in December the same year. The buildings and the garden are protected by French heritage law as a “Monument historique” since 1996.

Maison Louis Carré is the fruit of the encounter between two exceptional personalities and two cultures. The result is a building that perfectly integrates the spatial and formal qualities of Alvar Aalto’s architecture to the French landscape and lifestyle. Alvar Aalto’s persistence in designing everything, from the door handles and the furniture to the entrance gate, the garden and the swimming pool, results in a global work of art. The architect’s concept is best described in his own words: “The generous preparation of the land opened up incredible possibilities and allowed an unprecedented freedom to create the architectural whole: the house and the landscape together in one unique design” (letter to Will Grohmann, 10.8.1966).

Association Alvar Aalto en France was founded in March 2006. Its articles describe its purpose as: “the purchase and administration of the Maison Louis Carré at Bazoches-sur-Guyonne in view of promoting public interest and culture as well as the history and work of its Finnish architect Alvar Aalto”.

The Director of the Maison Louis Carré is Mrs Ásdís Ólafsdóttir. 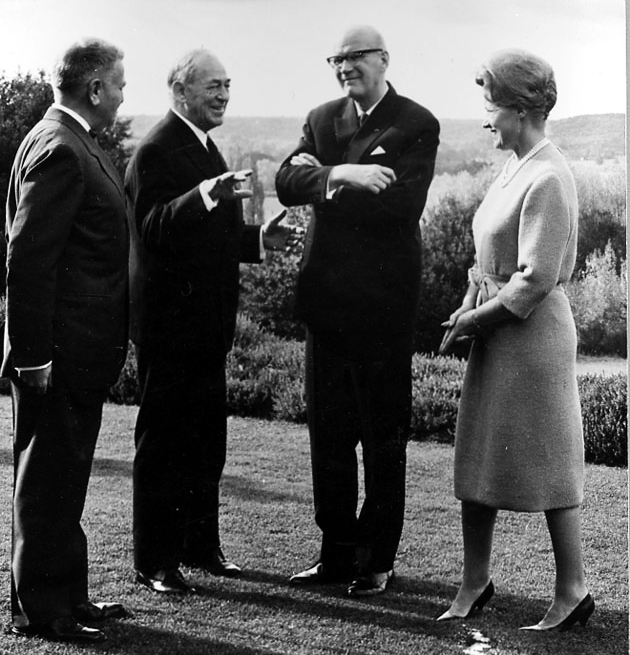 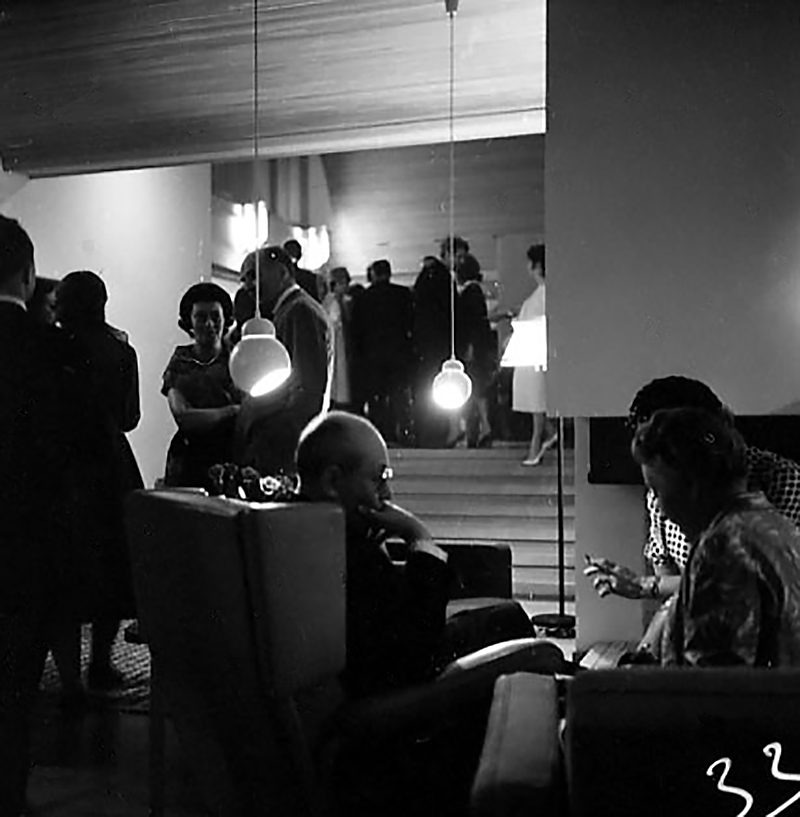 Association Les Amis de la Maison Carré was founded in 2004 and has as mission to make known and disseminate the only French work of Alvar Aalto, through the organization of meetings and events. The Friends also support the restoration work and cultural activities of Maison Louis Carré.